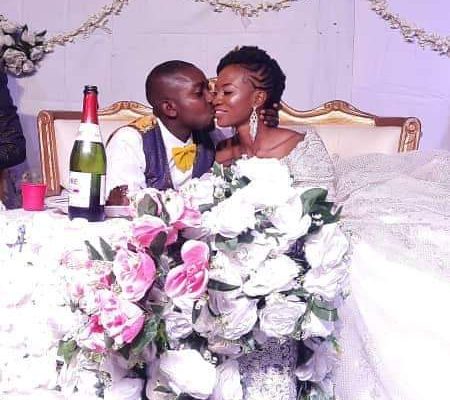 A Nigerian lady who promised never to sleep with any man who is not her husband, has shared her story as she finally marries husband.

The lady identified as Ihechi Ebe on Facebook narrated how she was turned down and castigated by several men, because she refused to give her body to them.

Read her story below;

Yes, I have given it to the only man who deserved and worked for it.

Although very painful, but, I am fulfilled because it was my sole desire to do this after marriage.

For those who castigated and doubted, you can rest now.

And for you who called yourself a lover, attempted to rape me to have it by force, God has put you to shame.

Ohhhh, I fought, I fought so hard to keep my vow to God, and I am so fulfilled having succeeded and I thank God for the man I call husband. Four years of patiently waiting isn’t moi moi.

And for you who doubted my virginity and needed a confirmation first before you believe, na mumu dey worry you, a real man believed it without attempting to confirm it and he patiently waited for four years, now, he has got it in its fullness.

You the rapist lover who attempted to take it by force, God done over punish you and you never succeeded, a real man has patiently waited for four years, now, he has got it and made it his customized size. Ntorrrrrrr.

I am not proud, but the truth is that I am blessed among women because I honoured God, and in return God honoured me with my own bone man.

I am also a blessing to my husband, real women are blessings to their husbands. I am a real woman.

Grace in me didn’t just get us married, it gave us job. The oil on my head is excess.

My husband has looked for a job for six good years, and just two weeks to our wedding, God gave him a job at Lagos. Isn’t grace at work?

For those who mocked him that after marriage, he will suffer as a jobless man, and those who castigated me for accepting to marry a jobless man, God has put all of you to shame. What God can’t do not exist.

My Journey of Life Part 1.

Ohhhh, yes, I am very proud of it and my mum is very proud because it wasn’t easy, in fact, I felt nobody would ever buy the idea of keeping it till marriage, until I met my husband man.

The journey of keeping it started from childhood, my mother nurturing me to be a Rev. Sister, at the age of 7, she led me to receiving first holy communion, after which she informed me of her vow to God to lead me into being a Rev. Sister. But, I never bought the idea, being in love with kids. Hence, my vow to remain a virgin till marriage set in. There comes all my temptations as a single lady.

And to those who feel my post isn’t necessary, only fools eat the glory of God or keep silent when God does wonders.

In search of true love, I met a whole lot of men, both the richest and the poorest, but, my vow was always a problem, as the society is so corrupt to accommodate it.

The very first man I met, didn’t just kick against it, cheated severally, called me names, asked me whether I think he should leave ebe ana agba afa gaba ebe ana aru agwu. He castigated me in several occasions, just because of my refusal for sex. He made two attempts to rape me. The last time, being on my sick bed, but I fought with my last strength. He felt he succeeded and left to tell my best frien, that the thing that’s making my head to be big, he has taken it by force. Within me, I knew he was just being a fool, and I thanked God for saving me, and ended the relationship.

It got to the turn of who called himself a pastor in school, since I wasn’t forthcoming with what he wants, he started having affairs and in my usual manner, I felt I shouldn’t disturb myself since I wasn’t ready to give in either. The relationship still ended with a girl he claimed to be his sister. Na my business? After all, I lost nothing.

The other one who became a custom officer hustled so much for it, but, it’s a no go area, the relationship still ended, and to me, there is someone out there who will respect my vow.

I fought and embarrassed a particular one who felt all his life was in it and felt he would ill talk me into succumbing. Omo, God is better for me than any man. My relationship with him matters most, so, I beat him up to prove that point to him.

Abi legion of Mary brother who got frustrated with my refusal, impregnated another woman. How e take remove anything from my body? I cared less.

One Prince of Delta State said it plain to me that he will never get married to me unless he tastes what he is going into. To me, he was very senseless at that point irrespective of his riches. I let him and his riches go to hell.

They mocked me, castigated my desire, called me names, but like Christ, I was never moved by their spittle.

There is one in particular who bragged to me about how he slept with assorted types of women who are more classy than I am. To him, I would feel bad, but never, it made my heart stronger.

I never came to any social media to make noise, but, I kept believing and trusting God that there is a man out there who will understand and keep this singular quest for me, hence, I wasn’t discouraged.

I can go on and on to recount so many of them, but the real g was somewhere waiting to meet me.

Finally I met my husband man on the 20th day of May, 2017, he promised to make my desire and vow a reality. And indeed he showed how great a man he is.

My husband didn’t marry me on a platter of gold, neither did I.
We went through a whole lots of challenges which would make 99.9% of men end the relationship, but he never did. He would have said, this girl isn’t satisfying my sexual urge, let me push her away, let me go into other women, but he never did such.

He fought so hard to keep me and make me his wife. He promised so with his life. He faced so many castigations, attacks, rejections, yet, he stood steadfast in his promises.

I made him everything to me. Posting his pictures on my wall made many uncomfortable, just as they are castigating my virginity post, they castigated my posting his pictures and criticized it. The same people run up and down disabusing his mind from posting my pictures any time he does, but that never changed anything.

I once had an accommodation problem and couple with him falling ill, he accommodated me. Yet, never took advantage of that. He respected my vow and desire.

When people never saw any sign of pregnancy, they started forming stories, castigation became the order of the day. They said two things are involved, either I am not medically ok, or he isn’t medically ok, if not, why haven’t I been pregnant for the past four years.

To end the challenges around us, some advised that I get pregnant for him and my question always was, how possible would that be considering my vow.

They publicly and privately discussed us and doubted us when we said, we hadn’t done anything yet and we are waiting till after marriage.

They mocked us before us, privately and publicly, I kept calm while praying to God to make this time a reality.

It was our private life, but idle minds made it their public affairs, dragging us up and down.

I remember two girls from my class had a bet with me, that, on my wedding night, I would be embarrassed as it will be confirmed by my husband that I am not what I said I am.

Some said that I am not a woman, that’s why I haven’t been pregnant, I wondered what the society is turning into, why nobody believes us and everybody puts interest in my being pregnant even when I was not yet married.

Each time we planned working towards our settling down, one problem or the other will set in, and the plan would fail. It repeated up to five times.

The last problem we had was in December 2020, I never knew we would reconcile, I felt that was the end of us. Because of so many challenges all over, I kept praying to God to separate us by himself and that if we aren’t for each other, we should never reconcile, but if he is my husband, God should find a way to bring us back to each other.

I still met another yeye guy who taught I would fall mugu because he is beginning to see change as money.

He stupidly told me that he needed to confirm my status before he would believe that I am a virgin. That provoked me to consider my love when he came asking for forgiveness.

I let go and accepted him back expressing my fears to him, and he still vowed to make me proud.

The stupid guy started posting pictures of a girl on his status, when I noticed that, I took him for a fool, knowing that my testimony is near.

Today, in all the challenges, difficulties, wahala, turbulent storms, wicked advises he wasn’t shaken by any of them and today he made real his promises.

If he fought so hard to keep his promises to me, why then will I not make it known to the whole world through this media, how a great man he is?

Why shouldn’t I testify of the goodness of God to me.

I urge you all to reach out to this great man and congratulate him for me and stop being envious of what you can never do.

I asked him today, honeym, what if you had tried it after marriage and found out I lied to you, what would you have done? He said, babe, there is no what if. I believed you and I knew that you weren’t deceiving me. If you had done something, I would have known too.

At that point, I remembered how comfortable he was and never suspected my movements.

Honeym, may heavens honour you, may heavens lift you, may heavens prosper you. For this singular act of yours, fulfilling your promises, you shall never know downfall. The God I serve shall keep you above your equals. The love we found in each other will never die. Our home is blessed. God’s favour and blessings will remain ours.
Amen.
I love you honeym.

I don’t care about haters.