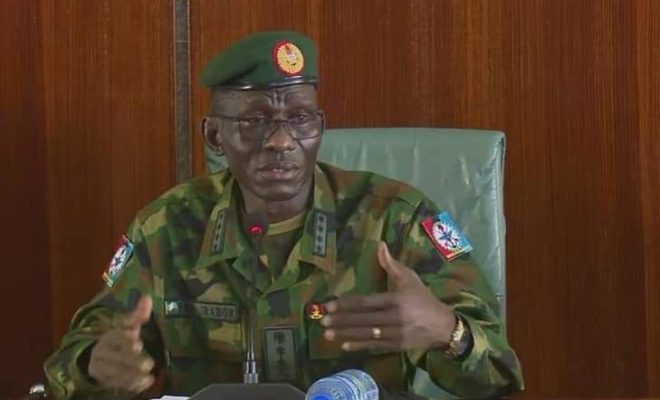 The Chief of Defence Staff, Lucky Irabor, has issued a stern warning to politicians attempting to lure military officials to stage a coup against the Muhammadu Buhari regime.

“The leadership of the armed forces is also telling politicians to leave us alone, do not mix us up with issues that have to do with politics and do not use political inclinations and persuasions to want to lure anybody from the armed forces into the idea of having to undertake coups and all,” warned Mr Irabor.

According to him, the leadership of the armed forces are of the opinion that a coup would do “more harm than good” in the present regime, hence it was not an option to be contemplated even by the younger military operatives.

“The armed forces of Nigeria have nothing whatsoever to do with anything that has to do with coup. We have learned our lessons over the years and we have come to our conclusion that coups will do us more harm than good,” he said.

He stated categorically that “this is what the leadership of the armed forces is passing down the chain, and educating everyone under our command that there is no reason whatsoever for anyone to contemplate that.”

Reiterating his standpoint on the subject of coup in Nigeria, Mr Irabor emphasized “We will not. That’s the reason why perhaps the discussions you may have been having in the media, we have been insulated from such discussions because they already know our viewpoint in this regard.”

Mr Irabor’s statement comes in the wake of successful coups staged against democratic governments in other African countries.

lagoslately
← Previous Story Why Ogun, Oyo, Osun, Others will Experience Prolonged Power Outage – IBEDC
Next Story → Many Injured, Shops Burnt as Residents Clash In Ogun. No Life was Lost – Police