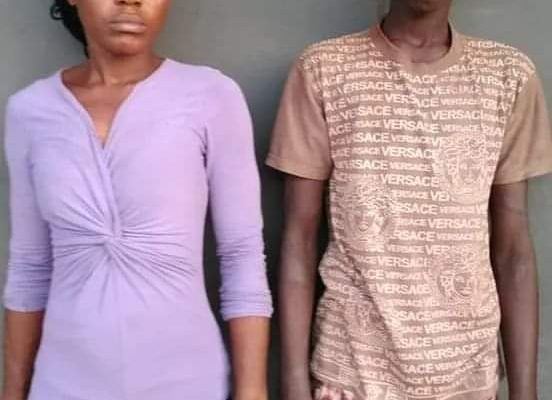 A teenage hearing impaired boy has drawn the ire of the law for alleged gruesome murder of a middle-aged woman.

The 17-year-old suspect, Godwin Ogbeifu, now in police custody, was alleged to have stabbed the victim, identified as Iyabo Olasheinde, with a broken bottle in the neck.

Also arrested is the suspect’s mother, 35-years-old Mary, for alleged complicity in the murderous act.

Godwin had left their Akoko Crescent resident in Yakoyo area of Ojodu in Ogun State and strayed into the now late woman’s compound on Omolara Street, also in Yakoyo, but was chased away by the residents, for reasons not disclosed.

Crime Puzzle gathered from a press release issued by the Ogun State Police spokesman (PPRO), DSP Abimbola Oyeyemi that, the suspect got home and narrated the incident to her mother, who got enraged and went to the house with the boy, to demand for reason(s) they acted scornfully to her son.

In a probable predetermined decision to deal ruthlessly with the deceased, the teenage assailant armed himself with a broken bottle and, on getting to the house, he wasted no time playing the script he acted; he stabbed the hapless woman in the neck.

Acting on the distress call he received on the unfortunate incident, the Divisional Police Officer (DPO) of Ojodu-Abiodun Station, SP Eyitayo Akinluwade, mobilized his men and moved to the scene, and arrested the mother and son.

“The victim was rushed to a nearby hospital for treatment, but was sadly pronounced dead by the doctor on duty”, the PPRO said, adding that the corpse had been deposited in a mortuary for autopsy.

He further stated that, the state Commissioner of Police, Lanre Bankole had ordered the immediate transfer of the suspects to the Homicide Section of the state Criminal Investigation and Intelligence Department (SCIID) for further investigation, with a view to charging them to court as soon as investigation was concluded.