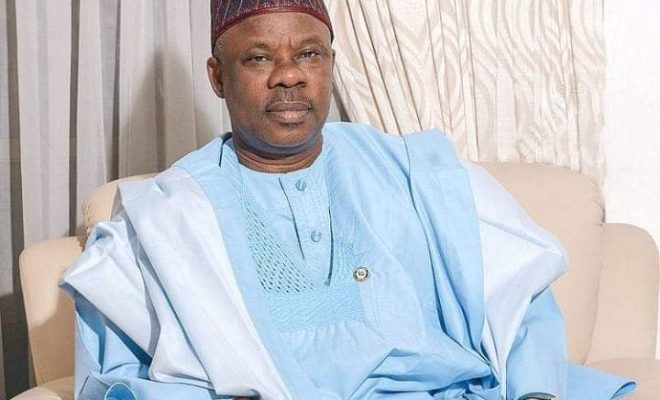 The 2023 general elections might be the mother of all elections in Nigeria as several political gladiators have been expressing interest in taking over from President Muhammadu Buhari after the elections, and the game appears to be getting interesting by the day.

However, information reaching has it that a former governor of Ogun State and the Senator representing Ogun Central, Ibikunle Amosun is set to join the bandwagon and declare his Presidential ambition in the first week of May, 2022.

Sources revealed that the APC chieftain decided to make his intention known at the end of the Holy Month of Ramadan and the Eid-Il-Fitri celebration as a staunch Muslim.

We were duly informed that the news has sent jittery into the camps of Vice President Yemi Osinbajo and Asiwaju Bola Ahmed Tinubu, both of whom have since gone to town with their presidential ambitions.

Amosun is believed to be better positioned for the coveted office as a close pal of the northern oligarchy, headed by Presidential Muhammadu Buhari.

Recall that Amosun was in the All Nigerian Peoples Party (ANPP) with key northern leaders and he was a member of the defunct Congress for Progressive Change (CPC) with President Buhari.

The Abeokuta-born politician is also said to be enjoying the support of the northern governors and majority of the APC members in the Nigerian senate.

“Amosun is highly favoured for the coveted office. They love him in the north and they believe that he is the best candidate compared to Osinbajo and Tinubu.

“They believe he has all it takes to move the country forward as a reliable southern Muslim with little baggages compared to his contemporaries.

“The north will go for him any day and he is a very good friend of Mr. President, so they prefer him,” a source told us.

Amosun is credited with several transformational projects in Ogun State, especially in the area of infrastructure as governor from 2011 to 2019.

The turnaround in Abeokuta with masisve road construction, construction of bridges in many parts of the state, education and health transformations amongst numerous others as Ogun governor were said to have endeared Amosun to the powers that be, who we gathered believe is more reliable than others.