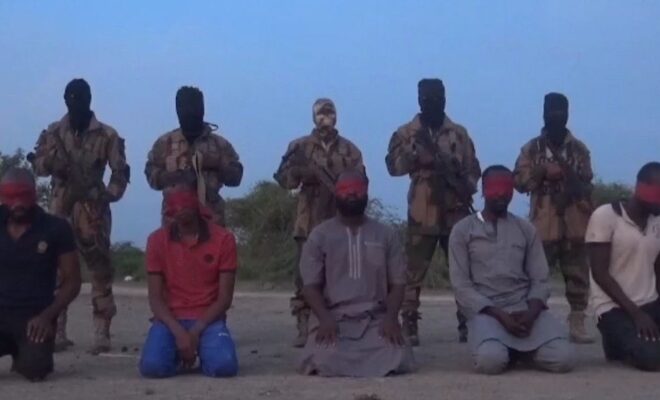 Suspected members of the extremist Boko Haram sect have shot dead five persons believed to be humanitarian workers.
The terrorist group publicized the development via a viral video it published on social media Wednesday.

The gunmen who carried out the killing said their victims were aid workers working for nongovernmental organisations.

The 35 seconds video featured five hooded armed men standing behind five abductees who were kneeling before them.

An unidentified voice speaking in Hausa said, “this is a message to the infidels who are using you to cheat and turn our people into unbelievers. You should know that your employers are just using you to achieve their aims, but they don’t care about you. That’s why whenever we abduct you, they don’t care about you.
“Our advice for you is that you should repent and turn to God, or else we shall continue to waylay and abduct you all in all the routes that you traverse.
“And if you don’t heed to our warning, what is about to happen to these five aid workers would also be fate that will befall you too.”